Gardenscapes is a free to play puzzle game that combines Match-3 mechanics and simulation elements. After great success on PC, Nintendo 3DS, it was released by Playrix in August 2016 for Android and iOS platforms. It became incredibly popular and names as the game of the year 2016 by Facebook. ZDNet also ranked it on #11 as the most downloaded games on Android. The game impresses with amazing and original gameplay with no limits on your creativeness. With exciting and challenging levels, players will meet new characters, earn money and build their own garden. The game allows you to connect on Facebook and find other players.

It is a fun-filled and exciting puzzle game with an original story and unexpected twists and turns. Players need to complete Match-3-levels to earn rewards to restore their garden. The game currency can be used to beautify the garden. The challenges look similar to Candy Crush; in fact, the fans of Farmville and Candy Crush are going to love this game.

Being the owner of the garden, the player needs to make sure it is up to scratch. There are different sections of the garden with tasks that are easy to complete, such as fixing a fountain, planting shrubs, etc. Then there are the Match-3-levels you need to complete and earn stars to complete the garden restoration for works like restoring a bench.

The graphics of this entertaining game are tantalizing, colorful and cartoon-like. Beauty mavens will definitely appreciate the diverse variety of décor items and designs. There is not much character movement in the act; they do have distinctive appearances that fit their personalities. Their dressing is not random but according to their role in the plot. The background sound is pretty relaxing, and the sound of birdies tweeting is euphonious. There is also cheerful music from the plants and fruits that fit with the game genre and does not feel repetitive and annoying. With the top-quality graphics and lovely music, this game has a movie-like storyline with interesting puzzles.

Gardenscapes is different from other casual games as victory is always attainable irrespective of the level of challenges. The game may seem very difficult as you start playing, but you will finally understand the gameplay after a few trials. With few power-ups as a mere sprinkle of salt in this video game soup, you can get a tile removing shovel via in-game purchase. Overall, this game is very interesting and rewarding with amazing graphics and long hours of replayability. 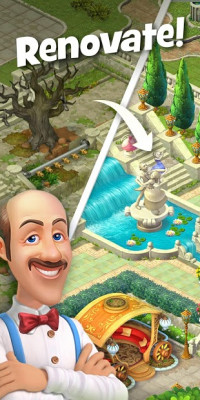 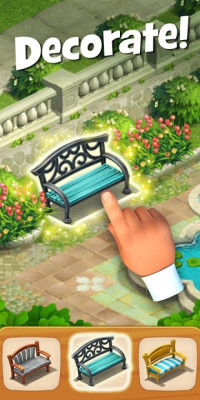 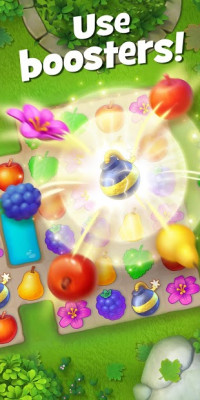